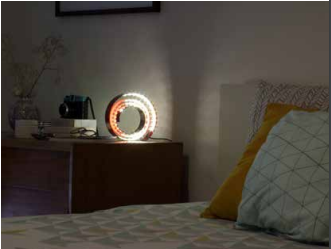 Hugo Ribeiro has a degree in Design Environments at ESAD – Caldas da Rainha School of Arts and Design. From an early age, he revealed that he had a different vision for creating new shapes, materials and colors, combining them in unique ways. HR Design Studio, created by the designer in 2014, is a Portuguese design studio willing to create, explore and showcase new details in Design. The marine fossil “Ammonoidea” from the Dinosaur period, was the inspiration through its natural and functional elements, to create a connection to modern times. The metal spiral and its illumination create the illusion of a natural texture between light, shadows and the space that surrounds it.