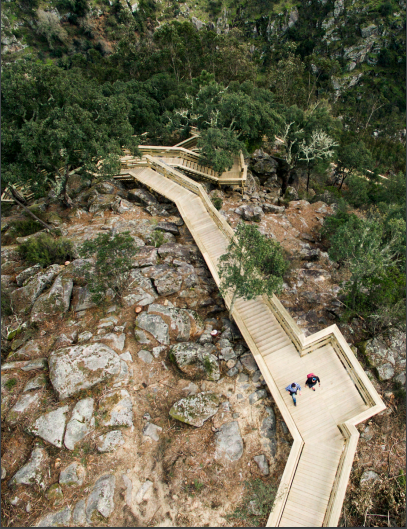 “WE NEVER IMAGINED THIS SUCCESS”

Paiva Walkways, regarded by World Travel Awards last year as the most innovative European project, is a work by architect Nuno Martins Melo, winner of the 2017 National Prize for Architecture in Wood. In this interview, the architect reveals that he didn’t foresee the impact that his creation would have in the tourism of the region.

What does this award mean to you?
This award has a special meaning for many reasons. It was without a doubt an honor to receive it and at the same time a great pride to earn this award. However, its special meaning has more to do with the evolution that this project and work underwent throughout their development. It was a challenge to make this project, and its final result was a great surprise. This award comprises the sum of all of those phases that were part of the work: the initial idea, the project, the construction work and, finally, the impact it had on people.

The Paiva Walkways are a “touristic phenomenon”, which have already attracted thousands of people to the banks of the Paiva River. When you conceived this project, were you already expecting this success?
We were obviously hoping it would be a different project which, consequently, would be more interesting to the population. And that was, in part, one of the reasons that made us, designers, immediately embrace this challenge/original idea mounted by the Municipal Council of Arouca, in 2010. Now, to be honest, we could never imagine, seven years ago, that we would get this far, with all this success and this award. It was undoubtedly the result of a big effort and determination of all the participants of this project, from its sponsor until its construction. At the beginning, when we conceived this project, we were very careful about details and the way that the walkway design would integrate the landscape. We intended, from the start, to make this project stand out from other works with similar characteristics. We can sum up by saying that it was always designed and conceived towards success, but that we never imagined all of this impact.

The Walkways are a sublime work, but are simultaneously very vulnerable, having already been affected by fires, for instance. Is this weakness inevitable? How could it be prevented?
I don’t think that the walkways and their vulnerability are the problem, it has actually to do with the way we’re still dealing with forests, and many times with our country. This recent fire in Pedrógão Grande and its resulting catastrophe are a clear example of this. The destruction of houses, factories, wide areas of forest and, even sadder, the many people who died as a result, demonstrate that our country doesn’t regard preventive measures as the most important step to avoid these tragedies. The local autarchies should also be more active in the planning of their territory, in this case of their forests. Even though I don’t know much about firefighting, it seems to me that this kind of situation is, a lot of times, unavoidable. When a fire starts, there’s no way of confining it to an area. Once it starts, the flames spread throughout the forest, destroying everything in its path, houses, roads and, in the last two years, unfortunately, the walkways.

Can you explain the process of creating and developing this architectural project?
There are some basic concepts that guided this project. We started with a broad view of the project, we drew this line along the topography of the territory, always taking into account the landscape, the privileged points of view, the requirements of every entity and the “elegance” that the walkway would provide its surroundings. The work developed at this larger scale could only be adjusted very much later, during its construction. At that time, the construction company presented us with an excellent work, never disregarding the initial idea while building it on the ground. As we progressed to a smaller scale, we began to think of
what could differentiate this project from others alike. We came up with this idea of a guard tilting slightly toward the landscape, finished with a handrail/board where one may rest their arms, admire the views and at the same time feel safe. I remember that this concept was initially highly debated among us, designers, as
we couldn’t agree on it mainly due to the amount of wood that would be required, a more simple and economic system would have been enough, but the outcome had a remarkable effect on the image of the walkway, not only on a smaller scale, as we cross it, but also on a macro scale, when one sees it in the distance.

What were your inspirations?
As we started the project there were many infrastructures that had to be conceived. A suspended bar, a bridge over the river containing an open-air café, and finally the walkway. We took different approaches in the different parts of the project, with wood as its underlying concept. When we started designing the walkway (concerning the part of the project which was implemented) we immediately thought of creating a guard/viewpoint. I remember that the guard of the walkway would be able to convey a sense of security and elegance, and that it would be the greatest strength of this project. We believed that such an approach would be able to work and, eventually, it became the key element of the concept and image of the walkways. That’s actually the only source of inspiration that I can remember, and from then on we had to design the project, so that everything would make sense.