In a daily treasure chest 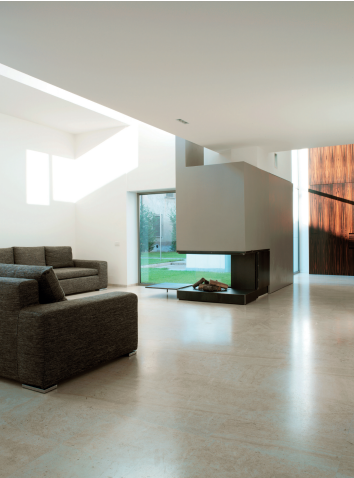 Casa Branca in Buscate represents a new housing and domestic experience originating from the binary division of the lot that hosts it in ‘rows’ that are parallel to each other and perpendicular to the axis of the city street. The ‘binary’ idea into which the entire project area
is divided creates the illusion of a spatial expansion of the villa’s garden, giving energy to the basic concept of a frame of concrete partitions aimed to organize domestic spaces and cleverly insinuating in the project implemented by Architect Roberto Mascazzini with Architect Nicola Zema. Therefore, the internal horizontal and vertical paths are designed with a few internal partitions in line with the initial idea. The view of the house on the narrow green corridor that separates the entrance from the street remains hidden by a massive border wall and closes respectfully on the family’s private dimension. We are in the presence of a contemporary ‘domus’ that combines the forms of Ancient Rome’s houses with the essential layout of contemporary spaces. The skilful combinations of materials such as metal plates, glass, wooden panels give movement and shapes to the facade on the rear garden, without contradicting the clear and pure white masonry. The domestic dimension of Casa Branca is fully expressed by the elegant development of the indoor perspective views in a context of protected and silent private.