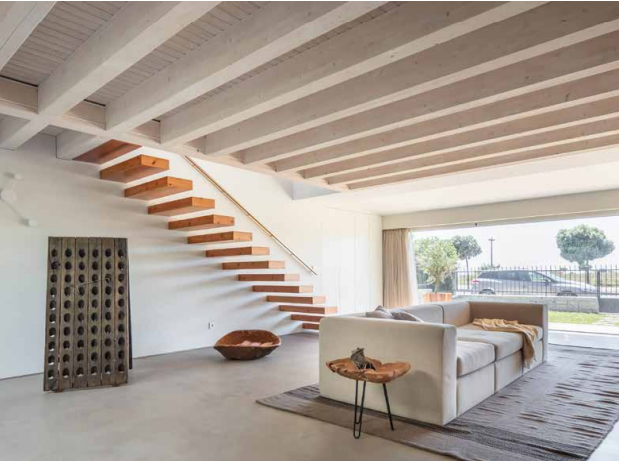 Facing Cávado’s River mouth and the 18th century fort of S. João Batista, in the city of Esposende, Casa da Marginal emerges from the desire of a young couple to rehabilitate a two-story townhouse, neglected for more than 20 years. The house, originally designed in the 1950’s by the Portuguese architect Viana de Lima, is part of a group of 8 small semi-detached summer houses, although strongly distorted from the original design, still show some traces of the original modernism. The challenge was to design a beach house, informal, flexible, that would establish a strong relationship with the surroundings and at the same time respect the pre-existent building. The condition of the building, as well as its small size made unavoidable its expansion both on the ground and first floors. On the ground floor, the expansion solution included the total occupation of the land on the back (East) of the plot and the creation of two patios that rescue the light to the interior of the new spaces. On the first floor the need for expansion led us to reinterpret the mid-century solution of thebutterfly wing roof, partially expanding the floor to the East. The house has an East West orientation, exposing all rooms to the Cávado River and its encounter with the Atlantic Ocean. For this reason it was impossible to resist the temptation to increase the original windows. Opening the façade created an almost absolute interpenetration between the interior and exterior, bringing the sea into the house’s interior. Because Casa da Marginal is a weekend’s house the program was developed with a focus on social areas, the entire ground floor was designed so that all spaces communicate with each other, kitchen, living / dining room, bathroom and guest room, avoiding corridors or antechambers. The first floor houses only the master suite, which through a large horizontal gap visually communicates with the sea. This is a summer house to be lived all year round, a house that encourages proximity, long meals, sunny afternoons in the garden or winter evenings by the fireplace.