AN ENCOUNTER WITH NATURE 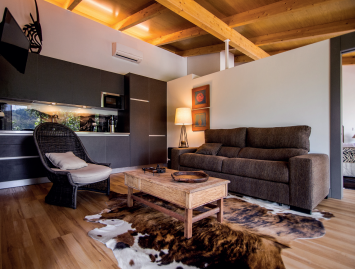 Quinta dos Carqueijais is a tourist development classified by Turismo de Portugal as a Country House (Casa de Campo). It is situated on the right margin of Caniçada Dam, very close to Peneda-Gerês National Park, within UNESCO’s World Biosphere Reserve. To enter Quinta dos Carqueijais is entering a new tourism experience, accessing the landscape through the farm paths, near the water level at the dam, feeling the sun and sometimes the breeze that comes from Cávado river. The whole space was meticulously planned, with the architectural recovery of the existing houses done by architect José Tavares Monteiro and the green spaces by landscape architect Manuel de Carvalho e Sousa, in a fusion of both projects globally articulating on a south facing slope. The six buildings, resulting from the restoration of old buildings, are perfectly integrated in the landscape, developed in successive levels, among large size broadleaved trees, with large grassy spaces and stone walls that abide the distinct landings. Each Villa has its identity and positioning. You may wake up with the sound of birds, in the middle of the trees, or you may open your wooden shutters and enjoy the water scenario of the Caniçada Dam.